by Jonathan Kissam and Karim Sariahmed

At the end of October, we traveled with four other people from the Healthcare Is a Human Right Collaborative to Chicago for the Single Payer Strategy Conference. The conference, hosted jointly by Healthcare NOW!, Labor Campaign for Single Payer and One Payer States, was an exciting gathering of organizers from all over the country, working to build a movement for universal, publicly financed healthcare.

Every year, America’s profit-driven healthcare system prevents millions of people from getting the care that they need, while generating fabulous profits for a small class of stockholders.  Transforming our healthcare system into one that recognizes and meets the human right to health for all people will require a mass social movement, 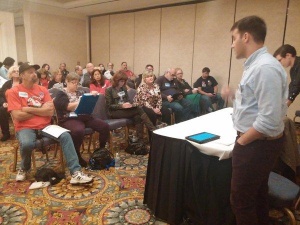 one that can overcome opposition from the powerful private health insurance companies, other corporations and institutions which profit and benefit from the existing system, and their ideological allies in both major political parties who are committed to small government and the supremacy of the “free market.”

How can we build this movement? This year’s Single Payer Strategy Conference was structured around five framing questions that challenged everyone to think strategically about what it means to build a movement, how we build with other movements, how we organize around the Affordable Care Act and move beyond it, how we move toward victory in our states and nationally, and how we can concretely confront inequities along lines of race, class, gender, and immigration status. These are all critical questions, and questions we take deeply to heart in our Healthcare Is a Human Right campaigns.

To build a broad-based movement and connect strategically with other movements, we need to project a big-picture moral vision, we need to build relationships, and we need to organize whole people.

A moral vision, rooted in deeply held human values, can capture the imagination of millions of people, become a new “common sense,” and thereby change what is politically possible. Many people at the conference made a connection between the civil rights movement and the creation of Medicare and Medicaid in the 1960s. Though the civil rights movement did not specifically demand Medicare and Medicaid, it established a moral authority that shifted the entire political landscape, opening up new political possibilities. Within this space, people rose up in motion around all kinds of issues, organizing against the war, for women’s rights, for environmental protection, for LGBTQ liberation, for the rights of people with disabilities, and for the rights of indigenous peoples. That is what we need to recreate.

We also need to build relationships across movements. We need to use our moral vision to connect our fight for health care with fights for Black lives, a living wage, immigration reform, trans liberation, and public school funding, but we can’t simply provide transactional support for one another’s campaigns. We have to build trust and develop real relationships with each other across movements, and we also have to be really intentional about making sure that our campaigns and organizations are truly diverse and inclusive and elevate the leadership of people of color, LGBTQ folks, immigrants, poor and working class folks, people with disabilities, and people of all ages. We do this through our base building, our leadership development, our political education, and all other areas of our campaigns. The hard work of engaging in this way is not a distraction: it is central to the work of movements, and is the only way to win a health care system that serves all people equitably and protects the most vulnerable.

When we organize, we also need to organize whole people, allowing and encouraging one another to bring our whole selves into the movement. Only by creating space for us to transform ourselves can our movements stimulate the broader transformation of institutions and social relations that is needed to win universal, publicly financed healthcare. Successful movements tap into our shared humanity and guide us together in common cause. The work that helps us be together is both the means and the end. When we are meaningfully united across difference, we win.

Our workshop on the Healthcare Is a Human Right model at the conference modeled our commitment to a moral vision, building relationships that challenge and nurture us, supporting each other’s leadership, and organizing whole people. We collaboratively planned and facilitated the workshop, brought our whole selves into the room through stories and poetry, and enabled everyone in the room to actively engage and contribute through storytelling in pairs and through small group discussions.

We win, as the conference organizers say, when we build a movement. By bringing people together to build relationships and dig into critical strategy questions, the Single Payer Strategy Conference serves a hugely important role in this process. Let’s keep building a moral case for transforming the healthcare system, keep building relationships with each other and with people in other movements, keep elevating the leadership of people who are most impacted by injustices, and keep bringing our whole selves into this fight.

Jonathan Kissam is a member of the Vermont Workers’ Center and Karim Sariahmed is a member of Put People First! Pennsylvania. They tweet at @domesticleft and @sariahmed.